For dancer Radhe Jaggi, the Margazhi festival was all about using Instagram to showcase how the handwoven drape can signify both strength and femininity

Radhe Jaggi’s Instagram Stories were no different, sparkling with an assortment of handloom saris from across India. The dancer-choreographer’s month-long ‘sari soiree’ that began in December was not merely a curatorial statement but reinforced the comfort and conviction with which this 29-year-old drapes her many saris.

As with many of us these days, her blouses set the tone. Her posts triggered a host of questions, often from youngsters, on how she was at ease in a sari almost every day. “I thought it would be lovely to share my collection. But I’m not going to tell you how many I own,” she jokes, reiterating that saris are not necessarily an occasion-based garment. 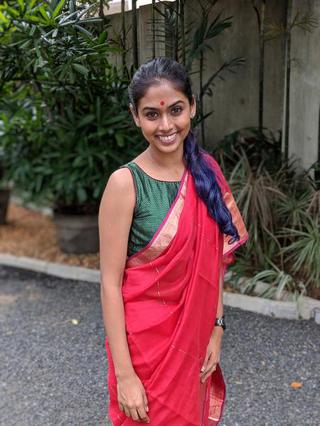 Radhe’s relationship with the classic drape began when she was a teenager. “When my mother passed away, my father, Sadhguru (spiritual guru, Jaggi Vasudev), handed me her saris. Even though she wasn’t a big wearer of the sari – my parents spent most of their married life travelling the country on a bike – that collection became a collectible, with its whiff of memories.”

It was at Kalakshetra in Chennai, as an undergraduate student of dance, that Radhe grew into a true sari convert. If the Isha Yoga Centre her father founded filled her with a nuanced appreciation for aesthetics, it was Leela Samson, her guru, the then director of Kalakshetra, who nurtured Radhe’s mature appreciation of the drape. “‘The fabric should flow,’ she’d say, ‘it must have a life of its own.’ That idea has somehow stayed with me.” She also credits Chennai-based arts, sculpture and textile connoisseur, Shantha Guhan as one of her biggest inspirations. “I love that she’s almost always dressed in a sari; her cottons are as gorgeous as her kanjeevarams. And she will accessorise every sari with something so simple and elegant.”

“Sometimes I like to think that a sari has a way of finding me,” she says, recalling an incident where she performed in a small temple town close to Madurai. “Someone who came for the performance bought me two saris but I didn’t like them and they took me back to the store. I found two gorgeous silk saris there that I used all year, and later converted them into a dance costume.” Among the 28 saris showcased this Margazhi, upadas and Odisha silk, tussars and linen, found an easy rhythm with her cottons and kanjeevarams. 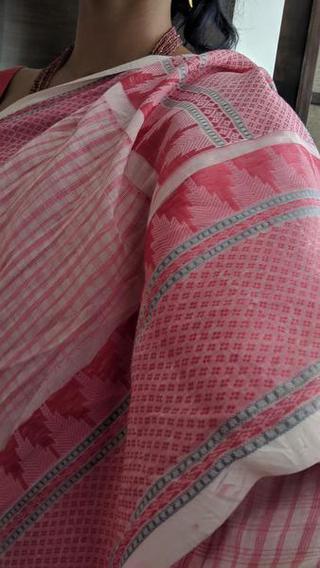 As expected, every sari told a story, from a kanjeevaram her mother-in-law gave her to a stunning Mysore silk sari that belonged to her aunt. An Ahimsa Iri silk sari shared space with a kalamkari creation that was sourced from a small village in Andhra Pradesh. And the blue linen jamdhani that received many ‘likes’ was unearthed “at an absolutely strange exhibition on my way to the Delhi airport”. This year will see more saris from her.

“Irrespective of its form and origin, it makes you feel feminine. It is possible to be strong and feminine at the same time.”

Want to watch this again later?

Sign in to add this video to a playlist. Login
Report
Category:
Hindi Video
You must login to be able to comment on videos
Reply